Our dinosaur stilts costume is such an awesome costume, which is 15 feet long, and 8 feet height. The best part is that you can flexibly move the dinosaur and higher than the audience. It just looks like riding-on a REAL dinosaur. You will get a chance to become a dinosaur trainer with the help of the stilts dinosaur costume.

Imagine wearing this costume and chasing the crowds in the Halloween cosplay parties or someone’s birthday party. Undoubtedly, you will become the superstar in the whole hall.

Our digitigrade legs dinosaur costume can be customized, you can choose the type, color, size, and functions of all kinds of dinosaurs by yourself. Contact us and tell us your requirements! We will create a wonderful one and send it to your home!

View cart “Vivid T-Rex Costume with Stilts” has been added to your cart.

Get Inspired by Dinosaur Costume with Digitigrade Stilts

looking for something to amaze your viewers? Then try our  realistic Digitigrade Legs dinosaur costumes!

How to Operate the Dinosaur Costume

It’s simple to operate. Hence check out the video for further details.

The digitigrade dinosaur costume with stilts is a fantastic choice for an unforgettable Halloween cosplay suit. You can easily move the dinosaur and stand taller than the audience. The best part is that you get to become a dinosaur rider with the help of this amazing costume. 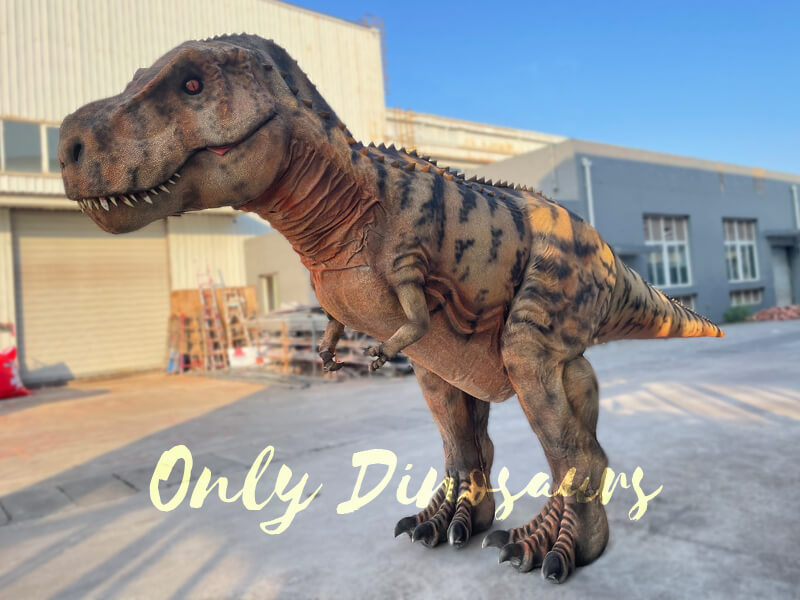 He is a giant guy about 21 feet long and 8 feet height.

This T-Rex stilts costume is made of high-quality fabric and detailed to look like the real thing! The body is brown with short arms and long legs.

He has a roaring mouth to complete the authentic look. This costume is perfect for any dinosaur enthusiast, especially if you love the Jurassic Park movies!

Dinosaurs go to parties? Heck yes, they do! You’ll be the life of the party when you walk around on this allosaurus stilts costume. With the help of him, you will be taller than most people.

He can walk, run, blink eyes, dance, mouth open and close, even make roars to the visitors. Your visitors will be happy to see him in the cosplay party.

The costume is perfect for Halloween, theme parties, or just for fun! Such a great costume, don’t you want to have a try? 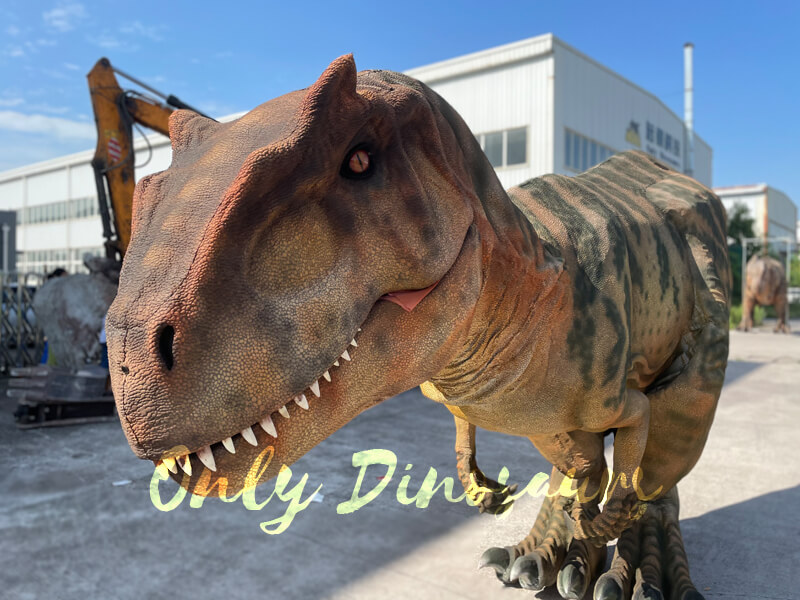 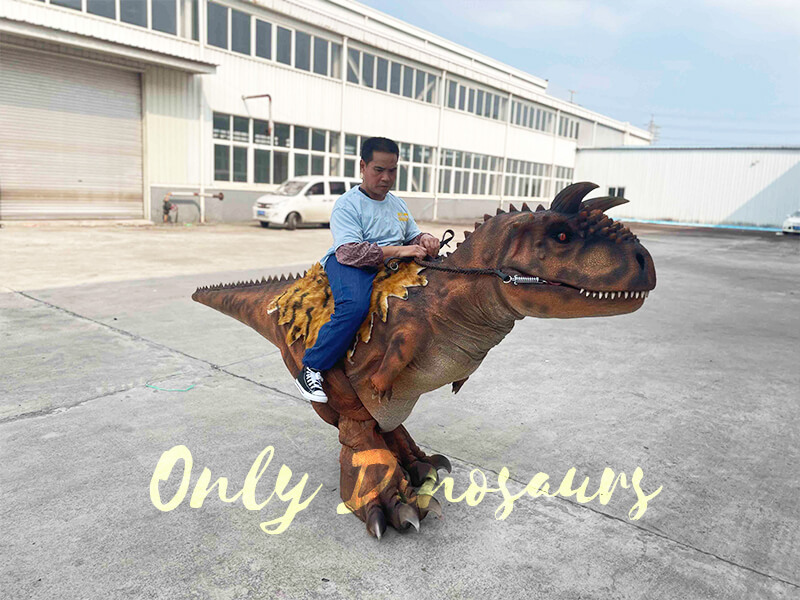 There’s a dinosaur in your place, and he wants to come out and play!

The ferocious carnotaurus stilts costume has a pair of stilts that turns you into an awesome dinosaur.

These stilts give you twice the height and make you look like a ferocious predator from the Jurassic period.

This affordable adult costume is easy to put on before heading out to be a life-sized carnival attraction or party-goer at your next event.

Take the dino walks this Halloween with this T-Rex stilts costume! It includes a full-body jumpsuit with an attached tail and stilts.

After wearing it, the performer can control the T-Rex to walk, run, blink eyes, move the head left to right, and open mouth to roar.

It’s got everything you need to own the next family reunion or party. So what are you waiting for? Become the life of the party in this T-Rex rider costume! 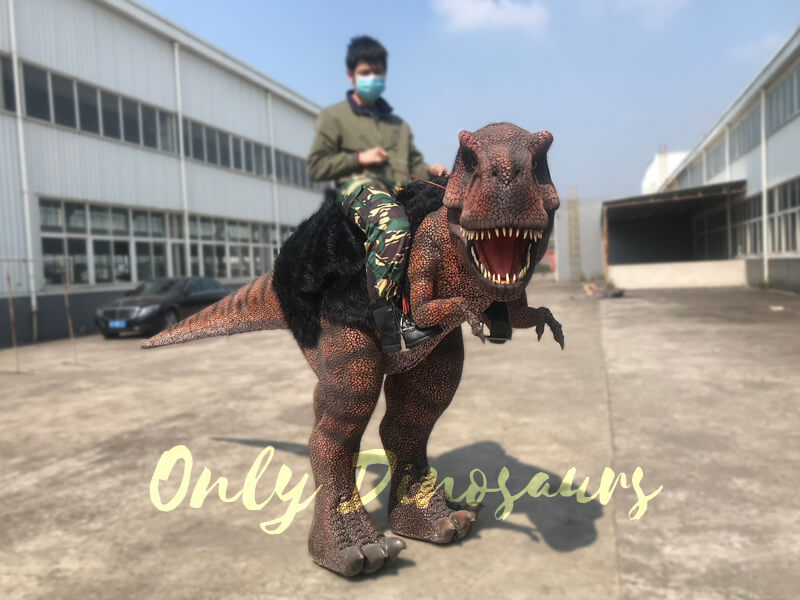 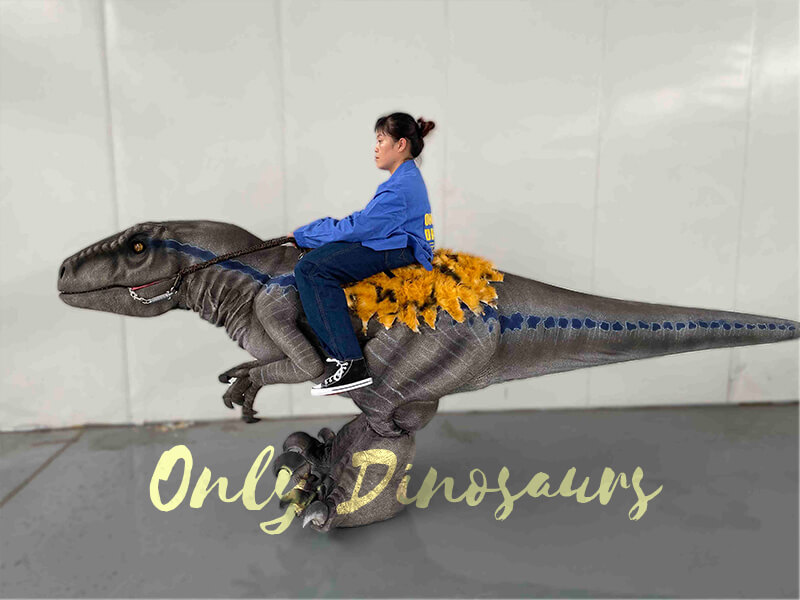 Get out there and make a dinosaur roar! This adult size velociraptor rider costume is made of breathable, breathable material. It has realistic movements and vivid colors, making you one of the most popular dinosaur trainers at the party.

He can do some movements of mouth open and close, eyes blink, head left to right, even roaring.

Don’t you want to bring him home? Tell us your requirements!

Inspire Your Audience with the Digitigrade Feet Dinosaur Costume

Realistic T-Rex Stilts Digitigrade Legs Costume for Party: If your goal is to create a lifelike dinosaur costume from the Jurassic Park franchise, then this T-Rex stilts costume is for you. You will have to assemble it, but it really looks great. You can use it for Halloween or cosplay as a dinosaur. The T-Rex is the most agile and intelligent dinosaur of all time, so you’ll need both of those qualities to assemble this T-Rex dinosaur costume on your own.

Lifelike Velociraptor Costume with Feet Extensions for Events: If the raptors in Jurassic Park have taught us anything, they’ve taught us that when wearing stilts, you must at all times carefully consider your surroundings. Because when you’re on your stilts, your perspective is dramatically different from everyone else’s around you. A raptor costume that lets you be the predator of your choice. It’s a vision so glorious, it’ll make you want to dance — even though you’re a human! You’ll feel fierce and ready to take on any dino-battles when wearing this adult raptor costume. The fabric is soft and comfortable, with vivid movements that make you look like the real thing.

Vivid Allosaurus Digitigrade Feet Halloween Costume: The allosaurus dinosaur costume with stilts is a great way to make a statement, and show your love for all things prehistoric. You can turn heads at your next gathering or party with it! This one-piece outfit has realistic stilts attached to the feet, so you can walk around as if you were one of those long-extinct dinosaurs. You can even wear it for a stroll at your neighborhood Halloween parade! Tell us your requirements and own your vivid velociraptor!

Indominus Rex Costume with High Heel style Foot Extensions: The only thing more intimidating than the terrifying, dinosaur-eating indominus rex is being the person who has to dress up like it. But if you’re willing to put on this exceptionally scary indominus rex stilts costume (and are brave enough to leave the house while wearing it), you may be rewarded with a new lease on life. Slash, claw, and roar through your next Halloween party or dinosaur-themed event. This indominus rex dinosaur stilts costume comes with a jumpsuit and tail, which are designed based on indominus rex in Jurassic World. It’s perfect for Halloween and other themed parties!

Cowboy Neovenator Halloween Dinosaur Stilts Costume: Having been discovered just a few years ago, the only thing more exciting than being an archaeopteryx is being a neovenator, one of the largest dromaeosaurs ever found. While you may not have been as big as this terrifying creature (and, let’s face it, you’re not), there’s something to be said for how well our realistic neovenator costume captures the muscular and ferocious look of this prehistoric animal. If nothing else, it will help you get noticed at any Halloween party! You might want to watch out for other dinosaurs if you wear it out in the wild though.

Answers you want to know

How tall is the dinosur costumes for adults?

Can you make the dinosaur costume which fit my size?

Normally, our dinosaur costume are made for adults, which fits height between 160cm – 180cm.

If taller than this, we can tailor made the costume which fit your size perfectly.

How much are the accessories?

For each dinosaur costume, we prepare the following accessories:

They are all included. No extra fee.

ACCESSORY LIST
How long can an operator wear the costume?

Well, it depends on many factors.

The main factor is weather temperature.

How to make a realistic dinosaur costume?

We have a page, which shows how to Make a Realistic Dinosaur Costume step by step.

How To DIY Realistic Dinosaur Costume

How long do they take to build?

Depending what type costume, complexity, level of details, have we done it before? The lead-time can vary greatly from 3 weeks to 2 months. We are very experienced in our craft, and can produce the costumes very quickly.

But with a greater allowance of time, our product will naturally reflect a greater level of details.

Can I repair or maintain the costumes myself?

The dinosaur costumes can be maintained by the buyer, which doesn’t require professional knowledge.

Our costumes and products include maintenance and parts manuals. Assistance is always available by phone from technicians at Only Dinosaurs.

What are the realistic dinosaur costume made of?

The realistic dinosaur costumes are made from stainless steel and foam.

There are two different dinosaur skin. One is Fabric Skin. The other is Silicone Skin.

The silicone skin has very much better skin texture, and shape, but the fabric skin has so much more head movement and of course weight advantage.

Due to its lightweight and flexible movement, nowaways most clients choose fabric skin options.

Do you have any Dinosaur Costume for Kids?

Most of our dinosaur costumes are for adults.

However, our team developed some Kids Dinosaur Costume.

Do you have warranty?

During warranty period, any damage happens, we shall DHL spare parts. All cost is on our side.

Meantime, we will send tutorial video to guide you how to fix, step by step.

Can you make custom costumes?

During the past few years, we have produced lots of custom costumes. Such as western dragon, wolf, gorilla, cartoon dinosaur, chocobo etc…

Please send us your design, and we will evaluate, then let you know if we can do or not.

Most importantly, our team really love to make something unique, interesting.

How about payment method?

Both wire transfer and paypal are acceptable.

Our dinosaur costumes are built with the finest, time-proven components available. And we pride ourselves in our designs and workmanship.

At least 4-5 years if well maintained.

To Be the first

Get updates for latest creatures and what we’re doing big.

Step 1: Fill out the form below and submit.
Step 2: Our team will contact you within 24 hours to confirm the order details.
Step 3: You can pay by wire transfer or PayPal, we will ship within one day after you pay.
Step 4: You will meet your baby dinosaur in about 15 days.

Ask For A Quick Quote