Skip to content
The basic features of dinosaur costume for adult

The Basic Features of Dinosaur Costume for Adult

Dinosaurs are extinct animals that ruled the earth millions of years ago. The species was the dominant one and was known as the most important one in the world. It was discovered that dinosaurs were the first inhabit that could be found in the air, sea and mountains. The Greek meaning of dinosaur is “terrible lizard”.

They first appeared approximately between 247 or 240 million years ago and dominated the earth for almost 175 million years. Then it is said that an extinction phenomenon occurred and this giant species has wiped out, except for the avian ones. Although scientists argue on this particular point on what actually happened, it’s quite sure that the extinction was almost a double whammy impact as an asteroid impact – changing of climate, volcanic eruptions and other associated factors.

These days, the prehistoric dramatic situation along with the realistic dinosaur costumes are created in the cinemas, theme parks, shopping malls, private theme parties, museum exhibitions and in the school events. The dinosaur suits are full-body costumes that an adult can easily put on. It is framed with high-quality stainless steel and is covered with high-quality foam. After that, lifelike texturing and plotting with a realistic skin color create a lifelike dinosaur. Basically, these are suitable for adults as the manufacturers maintain the prehistoric huge size.

A dinosaur costume for adult can make any event more exciting and successful.

How will you use realistic dinosaur costumes?

As we have already mentioned that a dinosaur suit is mainly used in the theme parties and the cultural programs. Different types of realistic costumes are available these days – visible leg realistic costumes, hidden legs realistic costumes, riding dinosaur costumes, dinosaur puppets and dinosaur hoodies for kids and pets. All of these are different in mechanism and activities but the basic features are almost the same. 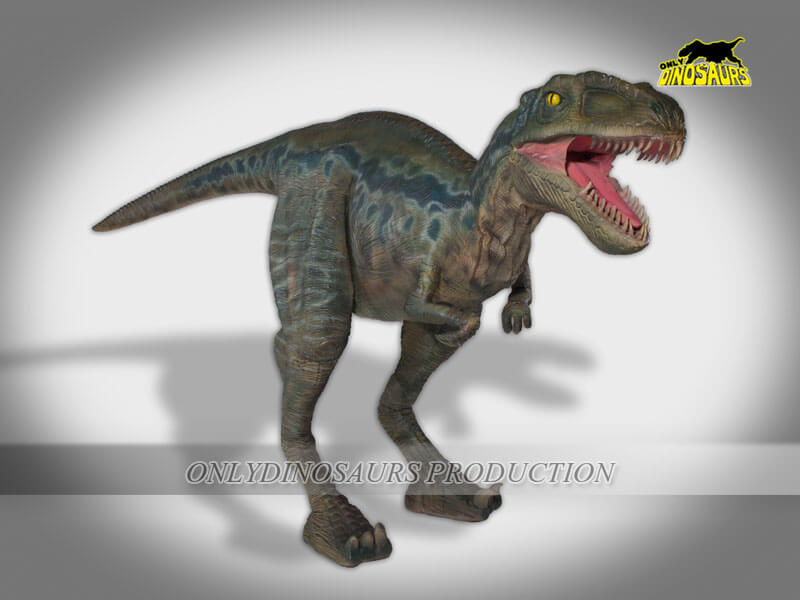 The most interesting part is that all of these dinosaur suits are really easy to operate. Operations make them alive. Once a performer wears a dinosaur suit, he/she needs to control the dinosaurs to make them appeared just like a real dinosaur. These movements include several basic body movements such as neck and head movements, walking and running around, swaying of the tail, blinking of eyes, flapping wings for the avian dinosaurs, opening and closing of the mouth and producing a scary roaring sound just like a real dinosaur straight back from the Jurassic era.

Whether it’s a riding T-Rex costume or any of the realistic dinosaur suits, two main buttons or wires are there to control all these movements. In general, most of the manufacturers provide a left-hand trigger to control the blinking of eyes and a right-hand trigger to control the opening of the mouth. When it opens the mouth, an automatic roaring sound is produced. The performer can easily see the outside scenario through a high-quality camera installed inside the stainless-steel frame. A monitor is also there to portray the outside scenes.

A realistic dinosaur costume for adult is really easy to control for the armature people.

How will you use realistic dinosaur costumes?

A riding costume is entirely different from these two costumes. On a riding T-Rex costume, you can feel the experience to ride on a vicious dinosaur. While riding, the performer controls its movements to make the dinosaur alive.

How to make a dinosaur costume more realistic?

When it comes to a realistic dinosaur costume, as the name suggests, it should look lifelike. For this, a sculptor should have sufficient knowledge regarding a real dinosaur – its features and movements. As mentioned earlier, the first step to build up a realistic dinosaur suit is to manufacture the steel skeleton and that needs a perfect knowledge about the dinosaur’s anatomy.

Once, the stainless-steel structure is completed, the sculptor attaches the high-quality foam to cover up the skeleton. Then it comes to texturing and creating realistic dinosaur skin. The more perfect the texture is the better it will look realistic. The painting also plays a very important role to make a dinosaur costume realistic. The painter should use high-quality paints for an Animatronic Dinosaur to make it appeared as a realistic one.

A realistic dinosaur costume for adult is nothing but a beautiful piece of art combined with mechanics and electronics. The more perfectly it is programmed, the more realistic it can be.

T-Rex, Velociraptor, Spinosaurus, Brachiosaurus, Allosaurus – these are the most common types of dinosaurs that are used to replicate as a realistic dinosaur costume. But these days, it is possible to customize a special dinosaur suit according to a particular customer’s specifications. The size, shape, texture, skin color, body movements and the sound produced by the dinosaur costume can be customized.

Several matters are involved while deciding the cost of a realistic dinosaur costume for adult. So, it’s not possible to declare a specific cost for a specific dinosaur suit.

Therefore, buying or hiring a perfectly suitable realistic dinosaur costume is really easy now. Only the type of the dinosaur and the particular occasion is needed to mention. With the help of a realistic dinosaur suit, you can entertain your guests more and will have a more successful event.